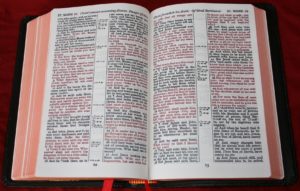 “Don’t stray too far from the red letters,” is a piece of advice often given to new preachers. It means, stay close to the teachings of Jesus and you can’t go wrong. It sounds good, but it’s actually bad advice.

Everything Jesus said was good and wonderful, but not everything He said was meant for you. Read the red letters of your Bible and you will find both stories of unprecedented grace and merciless declarations of law. Mix these messages and you will end up confused and double-minded. The solution is not to balance law and grace – you can’t – but to filter everything you read through the finished work of the cross. To make sense of what Jesus said, you need to understand what Jesus did and why.

Jesus lived at the crossroads of two covenants. As humanity’s representative He came to fulfill the old law-keeping covenant in order that we might relate to God through a new and better covenant forged in His blood. Since the new covenant could not begin before He died, Jesus lived all of His pre-cross life under the old covenant of the law:

But when the time had fully come, God sent his Son, born of a woman, born under law, to redeem those under law, that we might receive the full rights of sons. (Gal 4:4-5)

Jesus was born under law, circumcised by law, and presented in the temple according to the law. Every Jewish person that Jesus met was also born under law. We need to keep this in mind when we read the red letters of Jesus.

What law did Jesus preach?

To those under the law, Jesus preached the pure and unadulterated Law of Moses. When religious people came to trap him with theological puzzles, Jesus would respond with, “What did Moses command you?” (Mk 10:3). If someone asked, “What is the greatest commandment in the law,” Jesus would provide an answer from the law (Mt 22:36). In His law-keeping ministry, Jesus honored the Law of Moses:

The teachers of the law and the Pharisees sit in Moses’ seat. So you must obey them and do everything they tell you. (Mt 23:2-3)

Since the law-teachers often made Jesus angry, we might conclude that Jesus was opposed to the law. He was not. Jesus had no problem with what the Pharisees were preaching. “Do everything they tell you.” What really burnt His toast was their hypocrisy – they weren’t practicing what they preached:

Why did Jesus preach the law?

Like every grace preacher, Jesus esteemed the law and the purpose for which it was given.

The law was given to silence every mouth and hold the whole world accountable (Rms 3:19). The purpose of the law is to make us conscious of sin and reveal our need for a Savior.

Since Sinai, the Jews had had fourteen centuries to learn what the law would teach them – that the flesh is incapable of dealing with sin. However, the law-teachers and Pharisees had ring-fenced the Law of Moses with their traditions and interpretations. By honoring their traditions ahead of the law, they diluted the law and removed the key to knowledge. As a result, the menace of sin was not fully recognized and the self-righteous weren’t silenced. If the law had been allowed to do its proper work, the Jews would have been primed and ready for a Savior. Every one of them would have had an experience like the one Paul describes in Romans 7. “Nothing good lives in me. Oh wretched man that I am!” Live under the condemning ministry of the law and you will inevitably come to this question: “Who will deliver me from this body of death?” If the law-teachers and prophets had done their job, then the entire nation of Israel would have gathered outside that stable in Bethlehem in eager expectation. “He’s here! The Savior has come!” they would have said. “The One who will deliver us from the curse of the law and reconcile us to God has been born. Glory to God in the highest!”

Sadly, it didn’t happen. Since the law-teachers had been negligent, Jesus had to do their job before He could do His own. Before He could save the world from sin, He had to preach the law that made sin utterly sinful. Before He give Himself as the answer, He had to make sure we were asking the right question. Who will deliver us? So Jesus became the greatest law preacher of all time. As the prophet Isaiah had foretold, He made the law magnificent. He lifted up what others had knocked down and raised the standard to glorious levels of perfection. Never again would mankind be without excuse. You want to know what God expects? Just read the Sermon on the Mount. In it Jesus says that God demands perfection and nothing less.

How did Jesus preach the law?

Preaching the red letters of Jesus is a bit like drinking whatever you find in the laundry. If you’re not paying attention – if you fail to distinguish His life-giving words of grace from His death-dealing words of law – then you could really do some damage. Don’t believe me? Then consider these red letters:

This is one of the most-quoted passages in the Bible and it is vintage law. It is a killer scripture. It is not good news. This verse should make us shudder for it says that our forgiveness hinges on our ability to forgive others and we are poor forgivers indeed. Men sin against us repeatedly. Have we honestly forgiven them all? What if we miss one? And what do we say to those who have been raped and abused? What do you say to a young child who has been molested? “Sweetie, you need to forgive that evil man otherwise God won’t forgive you.” That’s not grace. That’s the condemning ministry of the law in full bloom. How do you forgive the unforgiveable? You can’t! Then you’re in trouble. The law condemns you as an unforgiver. Now you’re beginning to recognize your need for grace and this is a good thing.

Any time you read a conditional statement from Jesus, you should interpret it as law. “Do not judge and you will not be judged” (Lk 6:37). That’s good advice but it’s also law. To avoid something (judgment) you have to do something (don’t judge). It’s a blessing you have to pay for. And anytime Jesus makes a threat, you should interpret that as law as well. “Anyone who is angry with his brother will be subject to judgment” (Mt 5:22). That’s bad news for anyone with a brother!

Is the law for you?

That depends....have you been made alive in Christ? Are you trusting or trying? Jesus came to reveal grace but those who are confident of their own righteousness are incapable of receiving it. They don’t see their need. What they need is the law and Jesus gave it to them in spades. But Jesus’ larger purpose was to give us His life and His righteousness. So He also told stories about God justifying sinners and shepherds finding lost sheep. Then He went to the cross fulfilling the law on our behalf that He might be the end of the law for all who believe (Rom 10:4).

Jesus’ came to set the captives free and give sight to the blind. The law sets nobody free. But the law does reveal your need for a Great Deliverer.