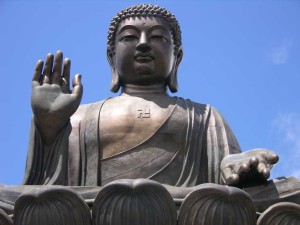 Right at the outset, I want to say that this is not a mean-spirited attack on Buddhist people. This is an examination or comparison of what Buddhism teaches side by side with what the Bible teaches. I pray it would be helpful to those who desire to share the truth in love with their Buddhist friends and eye-opening to Buddhist who may have not seriously considered these issues previously.

Simply put, Buddhism is mans attempt to escape pain and suffering through self-perfection and meditation. The goal is to eliminate desires in an attempt to stop the endless cycle of reincarnation and karma by attaining enlightenment and thus extinguishing self, desire, and pain; while at the same time becoming one with the universe. Buddhism is appealing because of its mystical aspects; it is also appealing to those who desire to escape from material reality. One works to attain “salvation” which is achieved by practicing Buddhist teachings and thus we can categorize Buddhism as a religion of works.

Buddhism and its beliefs

Buddhists do not worship any gods or God. People outside of Buddhism often think that Buddhists worship the Buddha. However, the Buddha (Siddhartha Gautama) never claimed to be divine, but rather he is viewed by Buddhists as having attained what they are also striving to attain, which is spiritual enlightenment and, with it, freedom from the continuous cycle of life and death. Most Buddhists believe a person has countless rebirths, which inevitably include suffering. A Buddhist seeks to end these rebirths. Buddhists believe it is a person's cravings, aversion and delusion that cause these rebirths. Therefore, the goal of a Buddhist is to purify one's heart and to let go of all yearnings toward sensual desires and the attachment to oneself.

Buddhists follow a list of religious principles and very dedicated meditation. When a Buddhist meditates it is not the same as praying or focusing on a god, it is more of a self-discipline. Through practiced meditation a person may reach Nirvana -- "the blowing out" of the flame of desire. Buddhism provides something that is true of most major religions: Good works, disciplines, values and directives that a person may try to live by.

A comparison between Jesus Christ and Buddha:

Siddhartha Gautama, the Buddha, was a mere man who died, was cremated, buried and never rose again. Siddhartha never claimed to be God or even a god and in fact, the Buddha is not even essential to the teachings of Buddhism. The Buddha’s goal was to simply bring his form of “enlightenment” to others so that they, on their own, could reach nirvana where all desires, pain and individual existence would be “put out” or “extinguished.”

Jesus Christ, on the other hand is the Messiah, the one that the entire Bible is written about. He is the theme of the Old and New Testament and without Him, there is no Christianity. Jesus Christ testified that He is the theme of the Bible in John 5:39, 46-47 – “You search the Scriptures, for in them you think you have eternal life; and these are they which testify of Me…For if you believed Moses, you would believe Me; for he wrote about Me. But if you do not believe his writings, how will you believe My words?”

In Luke 24:27  Jesus says, “And beginning at Moses and all the Prophets, He expounded to them all the Scriptures the things concerning Himself.”

And in Luke 24:44, Jesus “said to them, ‘These are the words which I spoke to you while I was still with you, that all things must be fulfilled which were written in the Law of Moses and the Prophets and the Psalms concerning Me.’”

John 2:19-21 says that “Jesus answered and said to them, ‘Destroy this body and in three days I will raise it up.’…But He was speaking of the temple of His body.”

This is extremely important theologically since the Bible teaches that God raised Jesus from the dead and that Jesus raised Himself from the dead. This is of course teaching that Jesus is God!

So, who is the better Christ? Buddha who is still in the grave or Jesus Christ who sits at the right hand of God in heaven (Psalm 110:1; Heb. 1:13)

Jesus Christ=Claimed to be God

The Buddha=Belief in God was not edifying

Jesus Christ=Crucified and rose on the third day

The Buddha =Died and was cremated

Jesus Christ=Is the Way, the Truth and the Life

The Buddha= Points to a false way

Jesus said, “I am the light of the world”

Buddha said, “Be lamps unto yourselves”

Just like all other attempts of man to reach up to God by our own works, we will fail. The Bible makes it clear that nothing we can do in the way of works, no good act can merit us salvation based on what we’ve done. We will all fall short of the righteousness required from God and the Bible tells us that over and over again:

◦ Isaiah 64:6 says, “And all our righteousnesses are like filthy rags.”

Our only hope in this lifetime, not many lifetimes like Buddhism teaches, but this one lifetime, lies in the perfect sacrifice that Jesus paid on the cross. That one act of sacrifice paid for my sins and I’m convinced that Jesus saw my face while He was dying on the cross for me. The bottom line is this, there is no nirvana and since there is no nirvana, meditation will not reach that end. The Eightfold Path may focus on such elements as right living, right conduct, wisdom and conduct in a social order, but it will not lead to salvation as we saw earlier. Not only is Jesus the only way to the Father (John 14:6), but He offers more hope than Buddha. Jesus extends salvation to the entire world (John 3:16) and He is the Christ, the Messiah, the “Lamb of God who takes away the sins of the world.” (John 1:29)