I thought we were are all children of God?!?

The Bible  explains that Adam and Eve were born in the image of God. After the fall of Adam all mankind inherited the “image of God” in which Adam and Eve were made (Gensis 5:3) - not in its original perfection, but in the sin stained and separated from the life of God image. We must accept that every person from the seed of Adam and Eve has been born in their own image, after their likeness – that is man in his fallen state, a state alienated from the life of God. So although the Bible is clear that all people are God’s creation (Colossians 1:16), and that God loves the entire world (John 3:16),  it is also true that only those who are made alive (born again) are children of God (John 1:12 ;11:52; Romans 8:16 ; 1John 3:1-10) 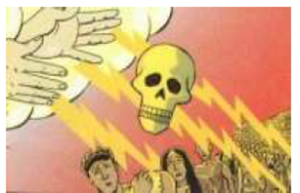 Therefore, just as sin entered the world through one man (Adam), and death through sin, and in this way death came to all men, because all sinned… (Romans 5:12)

Scriptures says we are born dead in sin, sons of disobedience.

"And you were dead in the trespasses and sins in which you once walked, following the course of this world, following the prince of the power of the air, the spirit that is now at work in the sons of disobedience"— Ephesians 2:1-2

Anyone not in the book of life is judged according to their deeds.

And I saw the dead, the great and the small, standing before the throne, and books were opened; and another book was opened, which is the book of life; and the dead were judged from the things which were written in the books, according to their deeds. And the sea gave up the dead which were in it, and death and Hades gave up the dead which were in them; and they were judged, every one of them according to their deeds. Then death and Hades were thrown into the lake of fire. This is the second death, the lake of fire. And if anyone’s name was not found written in the book of life, he was thrown into the lake of fire. Revelation 20:12-15

A natural man does not accept anything of the Spirit; a spiritual man does.

But a natural man does not accept the things of the Spirit of God, for they are foolishness to him; and he cannot understand them, because they are spiritually appraised. But he who is spiritual appraises all things, yet he himself is appraised by no one. For who has known the mind of the Lord, that he will instruct Him? But we have the mind of Christ. 1 Corinthians 2:14-16

"among whom we all once lived in the passions of our flesh, carrying out the desires of the body and the mind, and were by nature children of wrath, like the rest of mankind". Ephesians 2:3

Some people do not have the Spirit of Christ and do not belong to God.

Some people live according to the flesh and still need to die  in order to be sons of God led by His Spirit.

If we draw near to God, He responds and cleanses/purifies our hearts.

Therefore it says, “God is opposed to the proud, but gives grace to the humble.” Submit therefore to God. Resist the devil and he will flee from you. Draw near to God and He will draw near to you. Cleanse your hands, you sinners; and purify your hearts, you double-minded. James 4:6-8

The world is filled with immoral people (“outsiders”) whom God will judge.

I wrote you in my letter not to associate with immoral people; I did not at all mean with the immoral people of this world, or with the covetous and swindlers, or with idolaters, for then you would have to go out of the world. But actually, I wrote to you not to associate with any so-called brother if he is an immoral person, or covetous, or an idolater, or a reviler, or a drunkard, or a swindler—not even to eat with such a one. For what have I to do with judging outsiders? Do you not judge those who are within the church? But those who are outside, God judges. Remove the wicked man from among yourselves. 1 Corinthians 5:9-13

We were unrighteous, but at a point in time we were washed and justified.

Or do you not know that the unrighteous will not inherit the kingdom of God? Do not be deceived; neither fornicators, nor idolaters, nor adulterers, nor effeminate, nor homosexuals, nor thieves, nor the covetous, nor drunkards, nor revilers, nor swindlers, will inherit the kingdom of God. Such were some of you; but you were washed, but you were sanctified, but you were justified in the name of the Lord Jesus Christ and in the Spirit of our God. 1 Corinthians 6:9-11

Some people are blinded and perishing.

And even if our gospel is veiled, it is veiled to those who are perishing, in whose case the god of this world has blinded the minds of the unbelieving so that they might not see the light of the gospel of the glory of Christ, who is the image of God. 2 Corinthians 4:3-4

Only those who are in Christ have their past life removed and become new.

Therefore if anyone is in Christ, he is a new creature; the old things passed away; behold, new things have come. 2 Corinthians 5:17

Some people do not have Jesus Christ in them.

Test yourselves to see if you are in the faith; examine yourselves! Or do you not recognize this about yourselves, that Jesus Christ is in you—unless indeed you fail the test? 2 Corinthians 13:5

Some people will not inherit the kingdom of God.

Now the deeds of the flesh are evident, which are: immorality, impurity, sensuality, idolatry, sorcery, enmities, strife, jealousy, outbursts of anger, disputes, dissensions, factions, envying, drunkenness, carousing, and things like these, of which I forewarn you, just as I have forewarned you, that those who practice such things will not inherit the kingdom of God. Galatians 5:19-21

People are sealed with the Holy Spirit after listening to and believing the truth.

In Him, you also, after listening to the message of truth, the gospel of your salvation—having also believed, you were sealed in Him with the Holy Spirit of promise, who is given as a pledge of our inheritance, with a view to the redemption of God’s own possession, to the praise of His glory. Ephesians 1:13-14

Some people are currently living in death as children of wrath.

And you were dead in your trespasses and sins, in which you formerly walked according to the course of this world, according to the prince of the power of the air, of the spirit that is now working in the sons of disobedience. Among them we too all formerly lived in the lusts of our flesh, indulging the desires of the flesh and of the mind, and were by nature children of wrath, even as the rest. Ephesians 2:1-3

Those who disregard Jesus’ sacrifice can expect judgment and fire.

For if we go on sinning willfully after receiving the knowledge of the truth, there no longer remains a sacrifice for sins, but a terrifying expectation of judgment and the fury of a fire which will consume the adversaries. Anyone who has set aside the Law of Moses dies without mercy on the testimony of two or three witnesses. How much severer punishment do you think he will deserve who has trampled under foot the Son of God, and has regarded as unclean the blood of the covenant by which he was sanctified, and has insulted the Spirit of grace? Hebrews 10:26-29

The apostles begged people to be reconciled to God.

Therefore, we are ambassadors for Christ, as though God were making an appeal through us; we beg you on behalf of Christ, be reconciled to God. 2 Corinthians 5:20

We become God’s children when we are saved because we are adopted into God’s family through our relationship with Jesus Christ (Galatians 4:5-6; Ephesians 1:5).