Religion and the Religious

Religion can be defined as man’s attempt to impress God. It is an attitude that says, “I can make something of myself, I can earn God’s favor.” Although it may lead to works that are charitable, this mindset is fatally opposed to grace of God. It causes a man to  see himself as a co-savior. His motives may be sincere, but Jesus didn’t suffer and die on the cross to make you religious. He died and rose again to give you a new life – His life. Anything that pretends to be a substitute for the thrill of knowing Him – of trusting Him, being with Him, and walking with Him – should be rejected as inferior.

Religion can mean different things to different people. The word originally meant to bind as in bind or bound to religious vows, practices, or traditions.  Google “etymology of the word religion” and you will see that it comes from a Latin word meaning “to bind.” At its heart, religion is a form of bondage. To say there are good forms of religion is like saying there are good forms of slavery. Religion says “Do, do, do,” but the good news declares “It’s done, done, done!” For too long the world has been bound by the never-ending demands of religion. True freedom is found in knowing the One whose yoke is easy and light!

So that you may be certain in your mind, here are some reasons why religion is bad for you.

1. Religion is based on a lie

At the heart of religion is the belief that we can make ourselves good. It’s the serpent saying, “Do this and you will be like God.” We think Adam and Eve were fools for listening, but we repeat their mistake whenever we look to ourselves as our source of security and joy. Religion is a temple built with human hands. 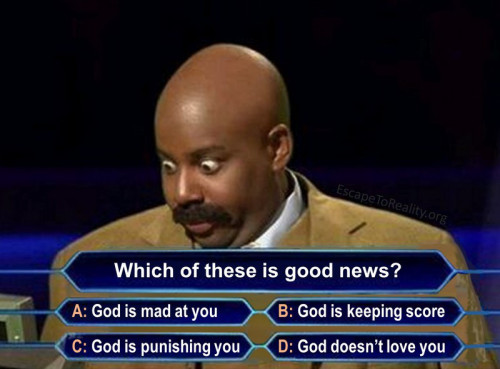 2. Religion prostitutes the love of God

Religion perpetuates numerous lies about the character of God.  “God is mad at you. He’s keeping score. Clean up your act first ” These lies feed the fiction that God can be bought. “But if you do A, B, and C, you can appease an angry God. If you are faithful and good, he will bless you.” What a villainous distortion of our Father's unconditional love.

3. Religion alienates you from grace

Religion offers a pathway to God that perversely leads away from him. “Keep these rules, heed these principles, do what you’re told, and you’ll be acceptable to God.” Nope. The highway of religious pride does not go to the throne of grace (Gal 5:4). 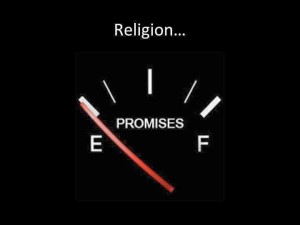 Forget Baal, the sun god, and television. The biggest idol is the one called Self. This idol utters two words again and again. “I will make things right. I will do better. I will never fall away. I will follow Jesus anywhere. I will do great things. I will be like the Most High.” Religion runs on will power and speaks the language of Satan (Is 14:12-14).

Religious people are the maddest people on earth and understandably so. They are hounded by the dogs of law. They carry unbearable loads. They hear the happy sounds of a divine party, but their pride won’t let them join in. Tell them that they’ve been conned and their investments count for nothing, and they will tear your head off. 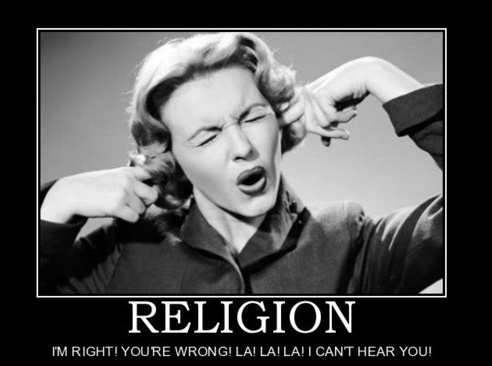 Jesus offers you abundant life here and now, but religion says the life you desire is only available tomorrow. “One day you may become the person you want to be, but right now you are incomplete, inferior, and far from God. You are a sinful, little grub with no value except that which you produce.”

This dehumanizing doctrine  is a million miles from the gospel of Jesus. In Christ you are completely holy and righteous, eternally forgiven and accepted forever!

Make no mistake – religion is rotten to the core. Like the Mafia, religious institutions may hide behind a storefront of good deeds. Don’t be fooled! Regardless of what it says on the brochure, the purpose of religion is to enslave you. Religion wins and you lose whenever you buy into its propaganda of uncertainty and fear.

Jesus didn’t suffer and die to establish religion. Jesus is the end of religion. 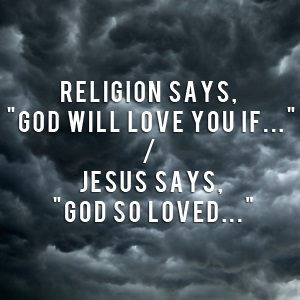 “I came into the world to testify to the truth,” said Jesus. “Everyone on the side of truth listens to me” (John 18:37).

These are strong words. If Jesus put them on his Facebook page he’d get roasted. “Jesus, how dare you claim to have the inside track on truth? Why must we take sides? How ungracious. How divisive. What gives you the right? Who do you think you are?” Jesus testified to the truth because only the truth can set you free. Religion, on the other hand, keeps you bound with half-truths, bent-truths, and damnable lies. The lies of religion are contemptible because they throw doubt on the good news of Jesus and keep enslaved those whom Jesus loves. Fix your eyes on Jesus, get settled in his love, and let nothing move you. Respond to His Amazing Grace and you will never be seduced by the lies of dead religion.